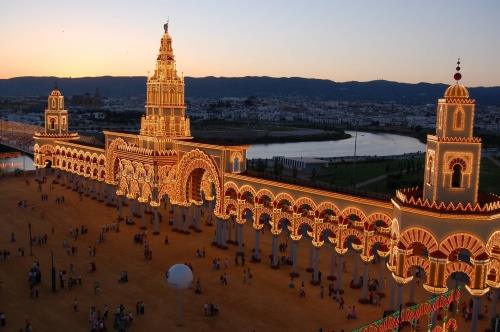 At about 11pm (maybe much earlier, but please check) we’ll be meeting in “La Tinaja”, next to plaza Potro, in “La Rivera” where we can watch the fireworks, and later , after the official inaguration, we’ll be going to caseta “La Lola”. According to other years experience I would like to remember that during feria time most people are delayed because irregular and crowded public transport; because they are meeting different people and many acquaintances in your way, because you are not fully conscious even at the beginning due to the previous day events, etc. So it’s recommended going with someone else and also being up to date how the night is evolving by using whatsapp, voice phone calls are useless. The main purpose of the meeting is greeting one another and also know new people in a party atmosphere, may be a couple of drinks, so if you have special preferences about dinner, you can do it before the meeting or after it or during the time of the meeting but I think it’s better in small groups, as large ones don’t fit anywhere easyly and may be don’t fit everyone’s preferences either.

Any cookies that may not be particularly necessary for the website to function and is used specifically to collect user personal data via analytics, ads, other embedded contents are termed as non-necessary cookies. It is mandatory to procure user consent prior to running these cookies on your website.